The Short North is a neighborhood in Columbus, Ohio, United States, centered on the main strip of High Street immediately north of downtown and extending until just south of the Ohio State University campus area. It is an easy walk from the convention center or Nationwide Arena district to the south. The Short North is often crowded on weekends, particularly during the monthly “Gallery Hop” and other local and downtown events.

The Short North has been described as “colorful”, “offbeat”, and “trendy”. The district is heavily populated with art galleries, specialty shops, pubs, nightclubs, and coffee houses. Most of its tightly packed brick buildings date from at least the early 20th century, with traditional storefronts along High Street (often with brightly painted murals on their side walls), and old apartment buildings and rowhouses and newer condominium developments in the surrounding blocks. The city installed 17 lighted metal archways extending across High Street throughout the Short North, reminiscent of such arches present in the area in the early 1900s. 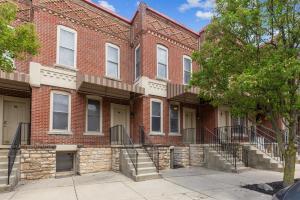